When you look at a piece of clothing, an electronic device or even a child’s toy, where is it most likely to have come from? China. In fact you would probably guess China without even looking. Everyone I asked guessed that their things like laptops, mp3 players and so forth were from China, or “somewhere in Asia”. When I was younger I used to imagine China was just a country where everything was made, that it was just factory after factory, and nothing else – of course I know now that this is certainly not the case. Still, a large majority of products are made in China, but what do we know about these factory’s?

There has been talk of China’s factory’s in the news as of late, in particular the factory Foxconn, which is the manufacturer for the likes of Apple’s iPad’s & iPod’s, Microsofts Xbox, and Amazon’s Kindle among other companies and products. The recent controversial topics surrounding Foxconn are with Apple following a record high in earnings in 2011, which were up over 100% compared to their previous years earnings, causing people to start asking questions. On one particular article I read about the massive success of Apple in 2011, the first comment was “Thank god for cheap Chinese labor”.

In China there are currently 13 Foxconn factories in 9 different cities – the most in any other country in the world. The largest is situated in Longhua, Shenzhen, with 430,000  workers, it is often refered to as “Foxconn city” or “iPod City”, and with that amount of people and things like worker dormitories, a grocery store, swimming pool, it’s own tv network, a downtown area with restaurants, bookstores, a hospital and bank, it certainly is like a city! Some of the workers, as guessed by the dormitories, live within the factory, while others live in nearby towns and villages. Without knowing what goes on behind the scenes it seems not too shabby, but is that really the case?
It was recently revealed after some investigation following such record high earnings from Apple about the conditions at Foxconn, the long hours the hundreds of thousands of staff worked (6 or 7 days a week for up to 14 hours a day), and the suicides of 17 of their workers (which prompted Foxconn to put up a barrier on the top of their buildings, and for workers to sign a form promising not to commit suicide). Apple promptly raised the workers average wage by 25% following the sudden epidemic of suicides. Apple’s chief executive Tim Cook said they are taking their working conditions very seriously for their workers.

American monologist Mike Daisey, who is an Apple enthusiast recently spoke about his trip to Foxconn after he saw a forum thread about someone who had photo’s on their newly bought iPhone of the inside of a Chinese factory. For me this was the first thing I had ever really heard or taken particular notice in, and it shocked me. He speaks with a joke thrown in here and there, but he tells the listener about how he meets workers from the factory, one girl who cleans the screens of iPhones all day long, every week, and she is as young as 13. This kind of work is not acceptable in the likes of the UK or America, so why is it in China? Another worker he meets is an older man (at another factory, not Foxconn), his hand is all twisted up and his hands are very leathery, and the man tells him how he’s moved to this factory because the hours and pay are better (70 hours a week), and the people are nicer. He also meets other people from Foxconn whose joints have disintegrated from the total wear and tear from doing the same repeated movements every single day for hours on end, and when they get to this stage, they are thrown off their line, and moved to another or fired. Really, this is horrific, without even doing research I know in the west, if this sort of thins happened, it would be headline news and not acceptable at all.

You can listen to his experience here

Following onto this, it’s very different to factory work you would find in the west. There aren’t factories like this in the west, why is that? Apple commented that they use Chinese labour because they work better than American labour. You’ll find people in the west also won’t apply (or certainly not enough) for the types of jobs like factory labour, they think they are above it, and they certainly wouldn’t apply for the amount of pay it gives, even in the current recession. 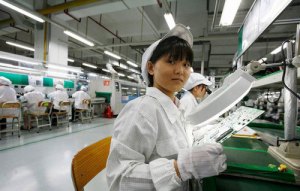 Is Foxconn and other factories like it so bad though? Well, yes, given some of the current conditions it’s certainly not great, so why do millions Chinese people apply to work at these factories? Well the simple and obvious answer is that it’s easy to get a job, and so an easy way to earn, albeit not a lot of money. But they have helped raise the economy in China, it’s helped move people from the absolute lowest form of poverty, to something not that much better, but to something better at least. Women in particular were given sudden job opportunities that they never had.

I think it’s a hard thing to comment on, of course these kind of factories aren’t good, not in their current state, but they are getting better, and I think if they keep continuing to improve, giving better conditions to it’s workers, not such intense hours, a higher pay and so on, they could really be not such an issue, in fact they could be a great(er) asset than they currently are to China.