Wild Swans is the true story of three generations of women in the twentieth century. My mother recommended I read this book a long time ago, its been sitting in her library for years now and I could hardly bring myself to read it because I just knew that if she thought I should read it it would be a harrowing tale! But I have resolved to read it during the holidays when I have more time and don’t mind my mascara dribbling down my cheeks. The book was first published in 1991 so its been out for over 20 years now , has  been translated into more than 30 languages and sold more than 10 million copies. Here is one of the reviews on the book.

“Riveting, an extraordinary epic. A work of true, living history drawing deep on family memories, an unmatchable insight into the making of modern China and the impact of war and totalitarianism on the destinies of a quarter of the human race.” Richard Heller , Mail on Sunday.

According to Zhang Weiying, an economist, that’s how long it will take China to get a market economy  . He was quoted in the Gaurdian in response to a case against an entrepreneur in China, Wu Ying.  According to the Gaurdian Wu Ying is facing the death sentence because her business empire failed and she has been charged with fraud and raising money outside the banking system.

The problems seems to me that the Chinese government want to have their cake and eat it. They encourage entrepreneurs like Wu Ying but are not prepared to support them as the  banks prefer to lend money to state- owned enterprises. This means that entrepreneurs seek capital from other sources,  private lenders who are looking for a better return on their money as interest rates from banks is so low. However in China it is illegal  to raise money from private lenders.  So its a catch 22 situation.

It’s obvious that the system is at odds with its ambition .  No amount of money on fancy PR can erase the brutality of a regime that holds out a carrot to its people but beats them when they bite.

On Friday I took part in a ceramics workshop which I must say was very enjoyable indeed. We used porcelain and moulds . The workshop is part of our Made In China module and we have looked briefly at Chinese ceramics. This is my version! 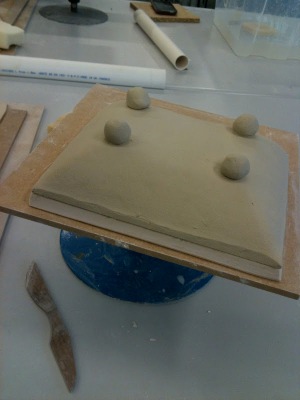 First of all we cut a piece of porcelain clay and worked it , a bit like kneading bread dough . Then we rolled it out quite thinly and placed it on a mould , shaped it with a damp sponge into the countours of the mould, cut off the surplus clay carefully with a wooden knife and then I added ball feet. Later in the afternoon I painted it with cobalt which is a blackish colour when applied but which turns blue once it is fired.
The dishes above had already been made for us so that we could practise painting with the cobalt and Chinese brushes. Later that day we glazed them and they were taken away to await their turn in the kiln. So it might be a week or two before I see the results. Thanks to Sean for the workshop it was great fun.

For this assignment I contacted a friend of mine and asked her if she knew any Chinese people that I could contact to interview. Fortunately my friend, a potter had been teaching at St Andrews University and had met a young Chinese student. I have named her Lui.  Lui has asked that I do not use her real name .

I sent a message to Lui through Facebook and she agreed to meet me, answer some questions and tell me a bit about herself.I noticed that Lui had some traditional Chinese artwork on her Facebook site and that she was working on an exhibition of Kirkcaldy’s potteries. So I was quite hopeful that we would get on well as she seemed to appreciate art & crafts.So on the agreed date we met in St Andrews at a pub and after introducing myself I bought her a drink and invited her to tell me a bit about herself.

Before coming to St Andrews Lui spent 8 years in Beijing, she studied English language and literature. She comes from a middle class family. Her mother is a doctor and her father is a manager and works in an office in a big institution. She didn’t say what this institution was. Lui’s parents have supported and encouraged her throughout her education. The view is that if you are better educated you will have better prospects in the future. Education is very important to her family. Lui has noticed that young people in the U.K are more independent of their parents than in China. It is important for her to consider her parent’s wishes but she thinks that in the UK children often do their own thing.

Lui had a book that she carried into the pub on Daoism so I asked her about it. She said that although not everyone studies that philosophy it has been subconsciously handed down through the generations and is part of her culture. In part the Daoism philosophy teaches how to perform your responsibility in society. It looks at life from the angle that everything is part of nature; we should not be afraid of whatever comes upon us but welcome it, as we ourselves are part of nature. This she feels is in  contrast to the American culture, which perpetuates the myth that if you work hard you can be successful. The American Dream she says is a dangerous culture as life is not like that.  Confucius, she says teaches us to first of all think of yourself, your family, your country, and finally humanity in general. So be a good person, always respect your parents as they have raised you and given you everything you need, look after them when they get old.

I asked Lui what she thought was the biggest difference between her generation and that of her parents and she said that it was the age at what her generation were getting married. It was rare for someone in her mother’s generation to marry late, they could afford to have a family and they wanted a stable family life. Whereas today people in their 20’s, especially in big cities, have so many opportunities and freedoms – sometimes too much and they don’t know what to do with it!

We spoke a bit about the consumer culture and the products that are made in China and how the Chinese are very good at reproducing Western ideas when it came to products. Did she think that China would start to produce goods that reflected more of its own culture? Lui hoped this would be the case and she proudly told me that China’s culture has lasted for 1000’s of years. Her grandfather was a scholar of Chinese literature and wrote books. She said it was her generation’s responsibility to continue the culture of China into the future. She could see problems though for China in the field of research and development as standards have been set by the West , standards that do not always sit well with the Chinese.

She then talked about the Terracotta Warriors and if you look closely you will notice that they have only a single eyelid, which is a sign of the Han people. The Han people served the emperor of the middle kingdom and although she has a double eyelid she  thinks she is descended from the Han, on her fathers side. Her mother is Manchu. She laughed about this and said that Chinese people joke about their lineage and debate about who comes from where.   Lui is very enthusiastic and proud of  her cultural heritage and noted that more and more Chinese are taking an interest in their past.

This picture is of a Terracotta Warrior , if you look close you will see the single eyelid of the Han. 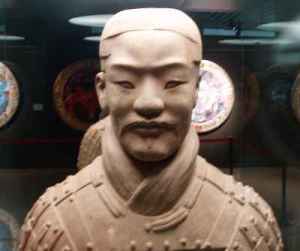 Lui is an only child as a result of the one-child policy and when I asked her about what she and her mother felt about how that policy has impacted on their lives she says that her mother and father have been able to give her so much more than if she were part of a bigger family and that although she sometimes gets lonely she has an extended family of cousins, aunts and uncles and grandparents. There is a big family reunion at New Year at her grandmother’s house and it is a very warm and happy time, the family is very important in China.

I asked her about the political situation in Tibet and she said that all countries have their problems  and why is China singled out for abuses when so many other countries have similar problems for example Britain has had problems in Northern Ireland. I asked  about Tiannamen Square but that subject was a no go area. “It’s in the past – forgotten now things have moved on and are getting better”.

It was  interesting chatting to Lui , I  found her to be very forthcoming on most things but she wasn’t comfortable talking about political events that cast China in a bad light which is understandable considering the fact that she has led a fairly comfortable life in comparison to many Chinese people. When you and your family benefit from a system you are hardly going to turn around and criticize it. Lui said that it is better not to have strong political opinions and take sides .  Lui goes back to Beijing after her year studying in St Andrews. 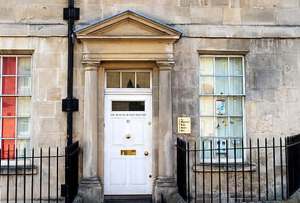 If you are ever in Bath, not in the bath! Take a trip to the Museum of East Asian Art. Behind this door is a private collection of amazing oriental treasures  dating from 500 BCE to the present day and  is the largest collection of Oriental art outside London. http://www.meaa.org.uk and they also have a Facebook page with details of workshops and exhibitions.

中国制造 Made in China
Create a free website or blog at WordPress.com.