Today, China is known for being one of the largest producers of pearls. It is a very ancient artistic tradition, but China began to use precious metals relatively late. Rare references for ornaments date from the Tang period (618-906). At the beginning of the Sung Dynasty (960-1279), the Chinese showed great interest in jewellery influenced by Persia and India. Only toward of the end of the 11th century, we can see local characteristics. The most important type of jewel was worn on the head like tiaras and diadems. We can see many influences in Chinese jewels from the Himalaya region (Nepal, Tibet, Bhutan), where the traditional skills were trekked from village to village, tribe to tribe. The jewellery traditions of the Far East reflect this immense environmental, cultural and economic diversity. However, many jewellery traditions were stopped during the time of communism, where personal adornment was severely criticised by the government. Only official badges and medals were authorized, in order to show one’s pride and loyalty to the party. Since the end of Mao Tse Tung reign, the Chinese have recovered the skills and knowledge to make ancient and traditional jewellery work.

Punched work, pierced work, and filigree are characteristics of Chinese jewellery. Their jewellery is seen to provide power and strength to the wearer. Animals were representative and symbolic. For example,  the dragon symbolized power and good luck, the goldfish for abundance of gold, the phoenix for good fortune, opportunity and luck, and many others like bird, tiger, monkey, bat, peacock. Clouds, flowers and twigs were also symbols of good luck. Colours and semi precious stones were worn in order to give power, but also to cure some diseases, give longevity, and to be healthy.  The most famous stones used for many centuries are coral, turquoise and jade. 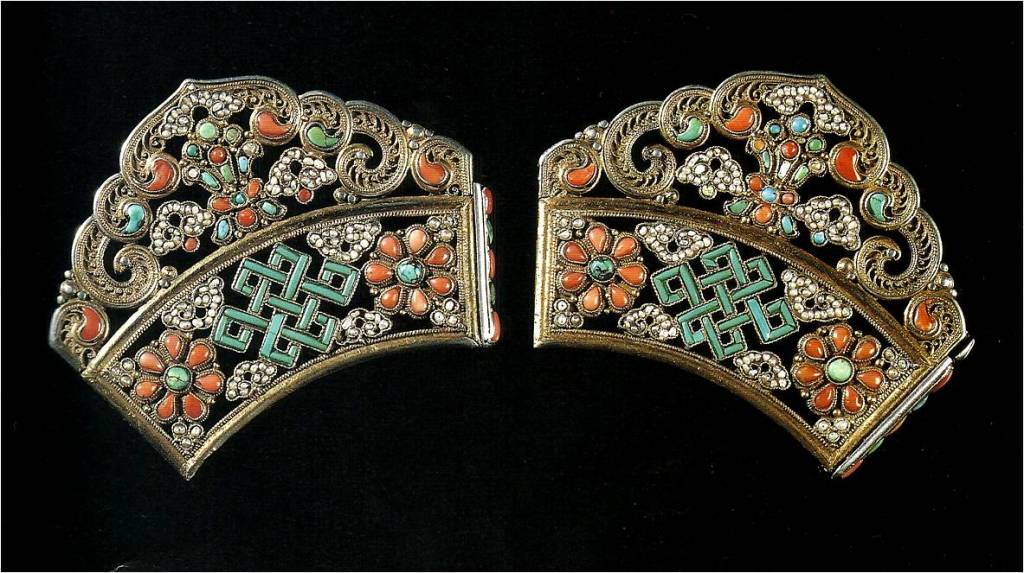 Turquoise is seen as a “living stone” that shares the ultimate fate of the mortal that wear it. Its colour symbolizes water, air and sky. This stone can counteract devil forces and make the wearer brave and invulnerable. In addition, seeing it in a dream may bring you good luck.

Coral is supposed to bring good luck, strength to women, and favourable effects on menstruation. The most desired variety is the Italian coral. It was brought by the Silk Road and was only worn by the wealthiest class. Marco Polo noted that Tibetans ranked coral among the precious stones and used it to adorn the necks of their women and idols.

Turquoise and coral were used to make amulet boxes in silver, gold or copper. Hidden spells or prayers in the boxes were used to appease evil spirits, while the decoration was symbolic to strengthen power content.

amulet box made with turquoise and coral stones

The blue turquoise colour was also given by enamel or by the very traditional Chinese process: using Kingfisher feathers. The technique, called tian-tsui, means “dotting with kingfishers” that involves using glue to adhere the feathers onto vermeil, or silver. The Kingfisher bird is highly esteemed by the Chinese for its colour and celebrated in poetry and song by Chinese from ancient times. Over the centuries, the Kingfisher’s blue colour feather became highly prized and extremely sought after as an inlay in decorative arts. Kingfisher feather were used by the Chinese to denote status, wealth and royalty. Today that tradition has disappeared; many birds were killed during the Qing dynasty just in order to collect their feathers and the skill of tian tsui has disappeared as well. But we can still see very wonderful pieces in museums. 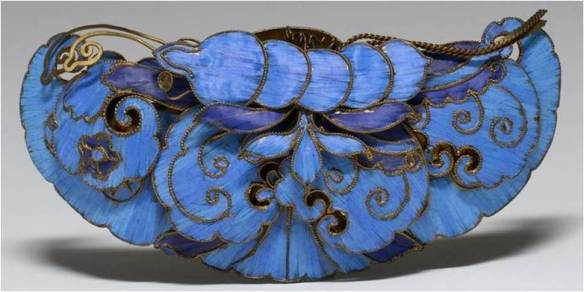 hair ornament made with kingfisher feathers 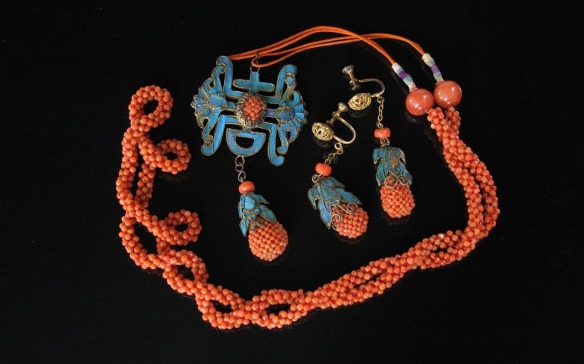 chinese necklace and earings made with coral beads and kingfisher feathers

This portrait of the wife of a high dignitary is painted on silk. It was made during the 1st Ming dynasty (early 15th century). She’s wearing a traditional headdress, which constituted with phoenix, clouds and flowers. The red beads were probably coral and the clouds in blue are made with kingfisher feathers to symbolize air and sky. We can also see turquoise beads on the pendants and pearls.

Turquoise, coral and pearls are very famous in Chinese jewellery. But the most famous stone is obviously the Jade. Not only for jewellery making, also for decorative objects, dishes, vases, hair comb… We found utilization of jade as jewel since Palaeolithic (hunter-gatherers) period with perforated beads at Zhoukoudian. But it’s during the Neolithic period the “art of jade” have started, caring in the Zhejiang province (5000 BC). The massive production of finely polished pendants and beads were being produced in South-East China during the 3rd millennium before Christ.  In ancient time, Jade was most expensive than gold. For example during the Imperial China, the first prize for an athlete was jade, after gold for the second place and at the third place ivory.

In ancient China, jade was used in rituals and sacrifices. According to ancient Chinese beliefs, the sky was round and the earth was square. A jade ornament with a round hole in the middle, called “bi”, symbolized the sky. A jewel of long hollow jade with rectangular sides, called “cong”, symbolized the earth. The bi was often placed with the corpse before burial as jade cicada was used to symbolize rebirth. 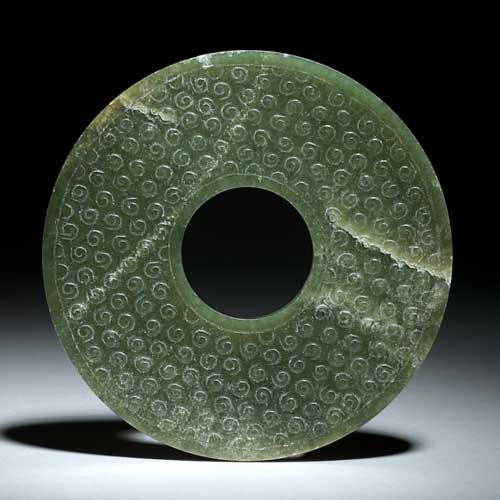 In the Han Dynasty, some leaders were buried in suits made entirely of jade. It was made of many pieces with various shapes, usually square, that were held together by thin threads of precious metal or silk, like the shroud of King of Chu. These extremely expensive structures were reserved only for elites. It is estimated that it took several years to achieve this kind of ritual costume that consists of 2000 to 5000 pieces! The Chinese believed that jade had magical properties and protected the corpse from decomposition. 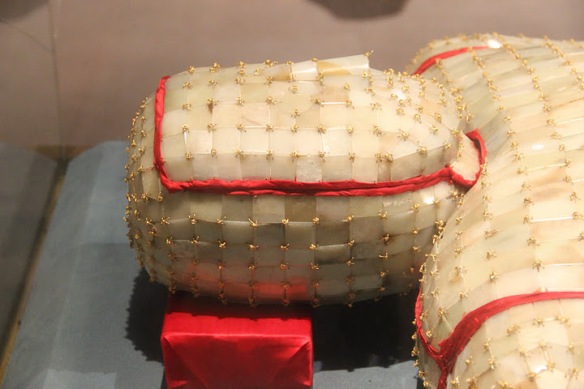 Jade is still being used today, although the techniques have changed with technology the jade objects as talismans, “bi” or decorative objects are still used in Chinese culture, and popular with tourists as souvenirs.